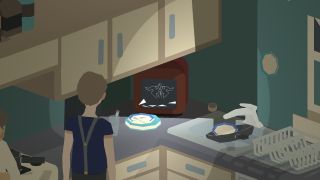 We once had a neighbour who would hammer, weld, and saw at all hours, prompting my housemate to regularly quote Tom Waits: What’s he building in there? We had a lot of theories, but never found out. Whether you’re making up stories about what next-door is up to or attributing every unexplained noise to “the ghost”, sharehousing seems to have an in-built tendency toward mythmaking.

That’s especially true of student sharehouses, full of overactive imagination and time to talk about nothing. No Longer Home reflects that. It’s set in a London flat and you play two students at the end of their degrees, about to move out and go separate ways—at least, for now. When friends come over for one last barbecue the conversation turns toward these stories, like that of the “love shack” one character had in his backyard. A rundown shed, it nevertheless managed to survive a storm and high winds. The landlord accused him of building it without permission, but it was there when he moved in. A strange little mystery, never to be solved.

No Longer Home exaggerates this mythic quality. Its seemingly ordinary kitchen-sink world is also one where students keep magic potions in the bathroom and your art project, an illustrated bestiary, may catalogue monsters that actually exist. Or maybe they don’t. There’s a hallucinatory quality to the stranger scenes, like you’ve walked through a door or stared at the toaster too long and fallen into your subconscious.

The surreal Kentucky Route Zero is a strong stylistic influence on No Longer Home, which is built on the foundation of the adventure game while containing few of its elements. There are no puzzles for starters, and instead of new areas gated behind brainteasers the story moves forward in time when you walk through certain doors—always signposted with text asking whether you want to move on, or chill here for a while longer.

Mostly you potter about the flat while boxes pile up and the damp spreads, walking from room to room as if you’ve forgotten what you were looking for, then petting one of the cats instead. You examine objects that spark memories, talk, and spin rooms around 90 degrees at a time to find things hidden by angles.

At one point you play a game within a game called Among the Leaves. It’s about finding a place to stay in a mystical forest, and you play it while sitting with friends who shout suggestions you can choose from. It’s a rare moment of branching in a game that’s otherwise more about choosing what to talk about than what to do—exploring theme and character rather than altering plot, deciding how the characters discuss what they want to do with the rest of their lives, or the expectations of their parents, or sexuality, or the mess on the counter.

Walls and furniture slide in and out of place and the lights dim and rise to make No Longer Home feel like a stage production: two-and-a-half hours of getting to know some people and a place, then the curtains fall and you’ve got something to think about afterward. I was left wishing for more of the weirdness, since that’s what I like stroking my chin and having theories about. The rooms No Longer Home takes place in usually hang as if they’re in space, suspended against a backdrop of stars, and in an introduction the protagonists stargaze while you decide what the constellation they’re looking at resembles—it’s deliberate in its vagueness, open to interpretation.

No Longer Home is out now on Steam, GOG, itch.io, and the Epic Games Store.