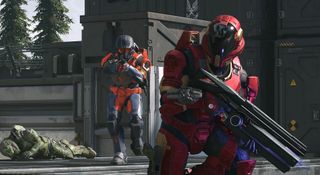 It’s a big deal for Halo that Halo Infinite’s multiplayer includes bots. It’s a first for the 20-year-old series, aside from the PvE Firefight mode that debuted with Halo ODST and the bots in a single game mode in Halo 5 called Warzone that was cool in theory, but also saddled with microtransactions. Bots being available in every multiplayer mode means Halo newcomers can practice against easier opponents, and players who love Capture the Flag but don’t want to deal with other human beings online can just jam by themselves. I expected all of this going into Infinite’s technical test, but I didn’t expect the bot names to make me laugh out loud.

I didn’t really consider the fact that Infinite’s bots would even have names, but it makes sense in hindsight. The scoreboard would be pretty dull with human names on one side and ‘Bot 1’ ‘Bot 2’ ‘Bot 3’ ‘Bot 4’ on the other. 343 Industries also could’ve gone with character names from the Halo series, but they did something much better, putting together an eclectic pool of philosophers and historical figures, deep cut movie references and what I assume are in-jokes, but they work for me anyway.

Despite some of these bots being named after very smart people, they’re not geniuses on the battlefield. On Friday 343 Industries kicked the difficulty up a notch, but the bots are still going to be a breeze for the average Halo player. Another difficulty level up the pole may provide a decent challenge. So far they’re competent, for the most part, but sometimes they get a bit… confused.

Still, these names: they’re great! Better than 99% of gamertags, that’s for sure.