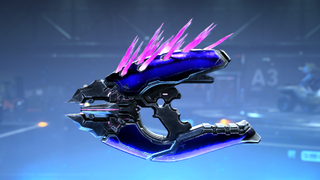 The needler never gets the respect it deserves. Halo fans have always raved about the Halo 1 pistol and the battle rifle, or the plasma sword or the Halo Reach grenade launcher or even the Covenant carbine, but dammit: I love the needler. And it looks like the combat designers for Halo Infinite do, too, because after a couple hours of hands-on with the multiplayer technical test, I think this might be the strongest the needler’s ever been.

I love the tiktiktiktik sound it makes as it fires out a quick sequence of razorlike purple crystals. I love that it homes in a little bit, because I’m a bad shot. I love the excitement and tension of those needles building up to a critical mass where they explode, instantly killing my target. Firing the needler is making a bet that I’ll land enough needles to flip its damage from puny to mighty, rewarding me with that purple cloud of death.

I’ll admit that needler in Halo: Combat Evolved was a joke, though. Sure, you could use it in the campaign to blow up some grunts, but it took way too many needles to trigger an explosion on other Spartans in multiplayer. Three pistol shots in your head and you’d be toast, your needler still half full. In Halo 2 the needler wasn’t much better by itself, but with the power of dual wielding it was fearsome: if you could get your hands on two needlers, you could pump a Spartan full of explosive purple in a blink.

Bungie really gave the needler the buff it deserved in Halo 3, making it strong enough to stand solo in a firefight. I’m sure there are Halo purists who hated that being killed by or using a weapon with homing powers, but that was just fine with me: it meant the needler was pretty much always sitting there on the map waiting for me when I wanted it.

I’m pretty sure the needler remained formidable in Halo Reach and Halo 4, but I don’t remember if it was as good at tracking and as quick to hit its explosion point as it is in Halo Infinite. Infinite has a pretty quick time-to-kill, so I’m not sure if the needler really sticks out as unbalanced. But is it good? Oh yes, it’s good.

Welcome back, you beautiful purple powerhouse.