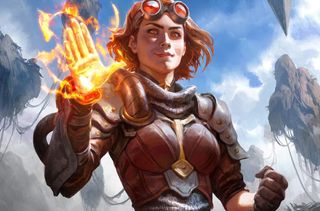 Under boxes of Christmas ornaments or trapped deep in the plastic of ancient Trapper Keepers you might find some of the rarest Magic: the Gathering cards. Over its years as the reigning king of collectible cardstock, Magic has always generated tales of the garage sale Black Lotus, the attic Mox Pearl, and the older brother’s forgotten Ancestral Recall.

But in the shadow of Magic’s nine most powerful cards is a murky realm of the unusual, the unobtainable, and the unknown. Let’s bring to light a few of the most interesting with some insight from Mark Rosewater, Magic’s head designer since 2003, Wizards of the Coast employee since 1995, and world-renowned artist.

Being the father of Magic comes with its benefits, and Richard Garfield has harnessed them to create a few special cards over the years. Starting with the first card, Proposal, in 1993, Garfield had a few copies made with special art he commissioned from Quinton Hoover. In one of the nerdiest proposals ever, he slipped a single copy into his deck, and then didn’t draw it until the fourth game to be able to propose to then-girlfriend Lily Wu.

PC Gamer: Over the years a number of cards have been made for Richard Garfield’s life events, with the most recent known being Phoenix Heart in 2014. What does it say about Magic that these kinds of promotional, arguably indulgent-and-fun cards can be so memorable to some fans?

Mark Rosewater, head designer: Having designed thousands and thousands of cards over the years, I’ve come to see the Magic card as a canvas capable of creating all sorts of artistic expressions. Yes, they can be game pieces, but they can be much more than that. Richard, for example, used it as a means of celebration to publicly acknowledge events that were important to him. I think this struck a chord with the Magic community because it reminds all of us that the game is more than just an activity we participate in, but a means by which we can create a larger community that adds to the richness of our lives.

Has anyone else done something similar?

When my twins were born, I announced it online with a card that I’d made. I didn’t print it like Richard did, but I did share my news with the audience through the medium of a Magic card. (It was the world’s first and only split creature card.) I have likewise heard a lot of stories from fans about how they, or sometimes their friends or family, made their announcements in the form of a Magic card. There seems to be something universal in sharing news through the format of something you love.

Back in the early days of Magic’s tournament scene, just after the birth of its Pro Tour (now the Players Tour), the third World Championship was to be held at the Wizards of the Coast headquarters in Seattle in the summer of ’96. Out of a field of 125 players, relatively unknown Australian Tom Chanpheng took down the heavily favored Mark Justice to win, earning himself a trophy with a one-of-a-kind card embedded in it.

I never knew of any plans to make another one and I was the person who designed the 1996 World Champion card. I believe it was just done as a one-of promotional event for that specific tournament. I did design one other unique only-one-exists-in-the-world card for a Japanese tournament center. The card was called the Shichifukujin Dragon.

Value: $10,000
No. printed: Unknown, most product was recalled and destroyed

Riding high on the smash sales success of the game in ’93, Magic had ordered another printing of its core set of cards, called Revised. But Revised had some problems, including an incorrect picture for Serendib Efreet, washed out colors, and it even sparked protests over satanic imagery. In an attempt to fix these issues, a new print run was started in the Summer of ’94. Despite the intended function of the print run, it came back with a fresh set of mistakes, extra dark inks. The most famous of these was the green card Hurricane printed as a blue card.

With the printing issues that surrounded Summer Magic in 1994, a lot of product got recalled to be destroyed, and although some clearly made it out there. Legend says that some was given out to Wizards employees. Are there still boxes of Summer Magic floating around?