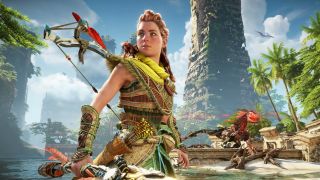 Horizon Forbidden West has not yet been announced for PC, but we’re confident it’s going to happen—eventually anyway. Sony has made no secret of its commitment to bringing first-party games our way, including Death Stranding, Days Gone, and Forbidden West’s predecessor, Horizon Zero Dawn. Even the famously PlayStation-exclusive Uncharted is apparently headed for PC at some point. Which is why it’s worth noting that the PlayStation release of Forbidden West has reportedly been delayed into early 2022, inevitably pushing the PC arrival even further off.

A rumor of the delay first surfaced earlier this week when Jeff Grubb said during his Giant Bomb program (via GamesRadar) that Sony was “leaning toward” delaying the game until next year, although as he understood it the matter hadn’t actually been settled. According to a Bloomberg report posted today, however, the decision has now been made, and Horizon Forbidden West has indeed been delayed.

The delay has the potential to make 2022, which is already turning into a monster year for PC gaming, to be even bigger. It was set to be a memorable one based on planned releases alone, with new games like Starfield, Stalker 2, Elden Ring, and Baldur’s Gate 3, but a slew of delays have pumped it up either further: Ghostwire: Tokyo, Rainbow Six Extraction, Gotham Knights, Hogwart’s Legacy, Sifu, Lord of the Rings: Gollum, Kerbal Space Program 2, Stray, and more have all been pushed out of 2021.

The delay hasn’t been officially confirmed at this point, and even if (or when) it is, it doesn’t necessarily mean we’ll see Horizon Forbidden West on PC  in 2022: As with Horizon Zero Dawn, which launched on PC three years after its original PS4 release, Forbidden West could be years down the road. In June, PlayStation Studios boss Hermen Hulst said that interest in the PC notwithstanding, Sony would continue prioritizing its own consoles: “Releasing games on PC will not come ever at the expense of building an exciting lineup of great console games.”

But Horizon Forbidden West is not a PlayStation 5-exclusive: It’s also coming to the PS4, which—-perhaps optimistically—could mean that a relatively not-too-far-off PC release is in the works too. I’ve reached out to Guerrilla Games to ask about the delay and will update if I receive a reply.