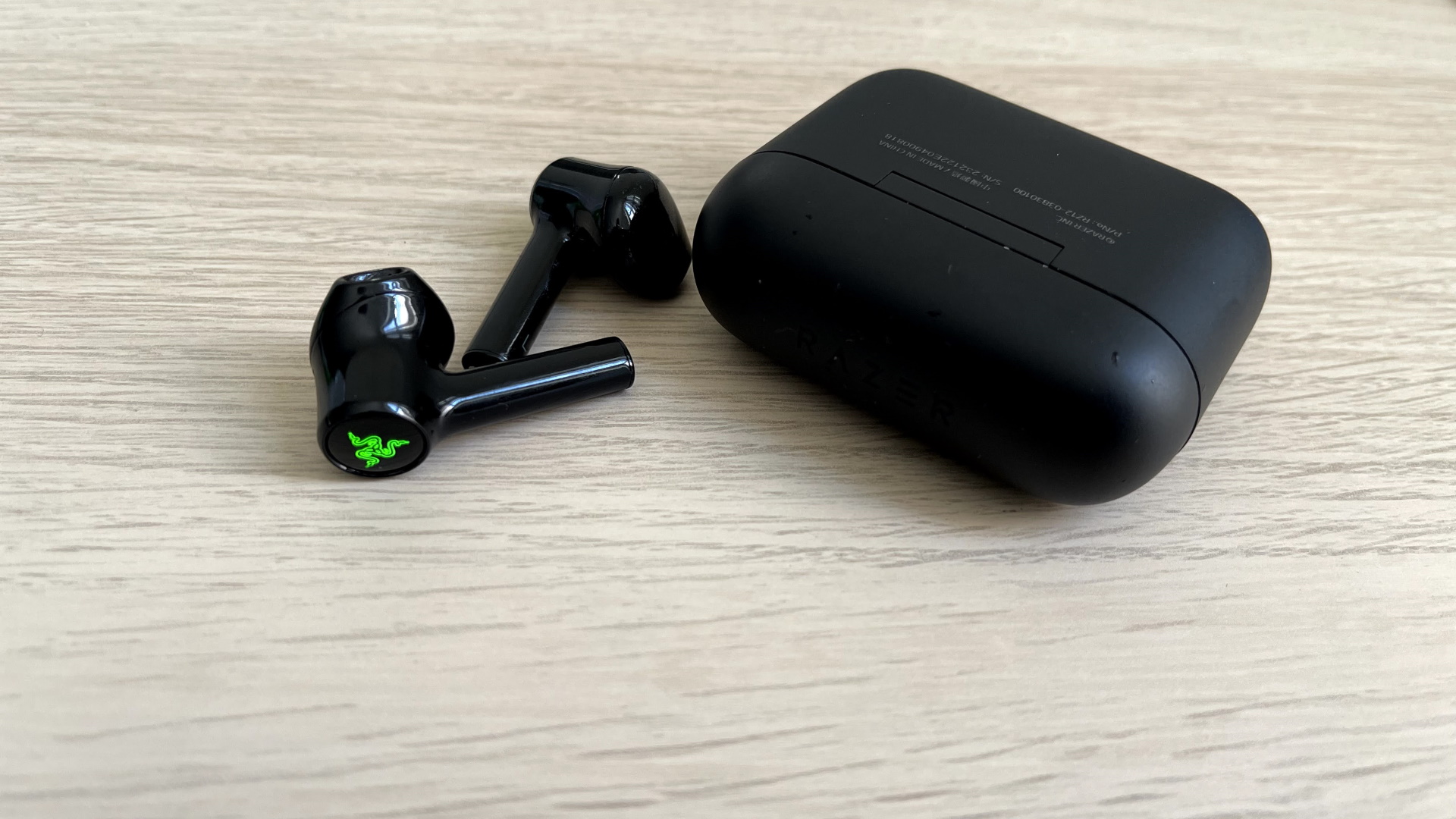 It shouldn’t surprise anyone that the Razer Hammerhead True Wireless X exists given the multi-billion dollar mobile gaming industry. At £69 (AUS $116), the Hammerhead True Wireless X offer impressive ultra-low latency audio, 24-hour battery life, IPX4 splash and sweat resistance, and a glowing Razer snakehead logo. ‘But surely Bluetooth is terrible for gaming?’ I hear you and so did Razer which is why the Hammerheads have a sort of overdrive called Game mode which lowers the latency to just 60ms. More on that later as we need to get one major sticking point out of the way.

The Hammerhead True Wireless X is the budget version of the Hammerhead Pro which, you guessed it, means fewer features and cheaper materials. The biggest difference being the use of a single plastic mould for the earbuds instead of a swappable silicone tips design. Remember the horrendous and massively divisive Apple Earpods that came with every iPhone and either fit you perfectly or not at all?

Yeah, that’s what Razer went with so if you are one of ‘le miserables’ like me, where wearing the Hammerhead True Wireless X is a nightmare. They sit too loosely in my ears at best and are constantly slipping out. I can’t even walk briskly without one of the buds dropping out and don’t even try running or doing anything that requires movement.

I also irritated the skin around my ear canals with constant fidgeting to keep the earphones in. Razer bundles a single pair of silicone wrappers that at least save you from the hard plastic but even those did basically nothing to improve the fit. Adding to my frustration are the touch controls which I kept activating every time I had to adjust buds causing my media to pause or skip. Ugh!

But the most frustrating thing about the terrible fit is that the Hammerheads are actually one of the best sounding wireless earbuds I’ve ever used. This is in spite of the bud design that offers zero sound seal, letting you hear everything around you loud and clear. Razer’s custom-tuned 13mm drivers deliver a hell of a punch with impressive clarity and sound stage. I can only imagine how much better they’d sound with good silicone tips.

Listening to music was a pleasant surprise given how well the Hammerheads separated the vocals from the warm mids and punchy bass. The sound stage is larger than expected, less in your head and more just outside of your ears if that makes sense. The same was true for phone calls and chat. Callers said I sounded loud and clear even when I had plenty of background noise.

But ultimately, the Hammerheads are marketed as wireless gaming earphones and Bluetooth isn’t traditionally the best for that purpose due to its high latency or audio lag. The last thing you want when playing fast-paced games like Call of Duty Mobile or PUBG is your opponent’s footsteps a second later than when they actually ran right in front of you.

And this is where we go back to the Game mode I mentioned at the start. Triple tapping and holding either of the buds activates the Game mode which has a much faster 60ms response. To put this in context, depending on the device you connect the Hammerheads to, latency can vary on average between 200ms to 450ms. Game mode then makes a huge and noticeable difference to the audio response.

The easiest way for me to test this was a simple, down and dirty video lip sync test. I ran the same YouTube video with and without game mode to observe the delay between when I see a character’s lips move and hearing the audio. Game mode was bang on with the sync compared to standard mode. This was enough to convince me it’s fine for fast-paced games where every advantage counts.

Game mode must affect battery life but given that Hammerheads lasted six hours per charge with 18 more in the case, I wouldn’t worry too much. I never encountered a scenario where I ran out of juice. And, you can get a few more hours out of them by turning off the logo lighting.

If you’ve read our review of the EPOS GTW 270, we’re not averse to the idea of gaming earbuds. The Hammerhead True Wireless X proves that it can be a viable option. I love the sound that they produce, the generous battery life, and the Game mode. I really want to love these but I just can’t get past the hit or miss fit.

By not using silicon tips, buyers are left with no options if the Hammerheads don’t fit out of the box and at $70 that’s a big gamble. Unless you have a positive experience with Apple-style buds and they work for you, avoid these. If you really want wireless gaming buds then get the Hammerhead True Wireless Pro which will fit most people just fine.

If you’re in the market for a new set of headphones, be sure to check out our guide to the best gaming headsets.