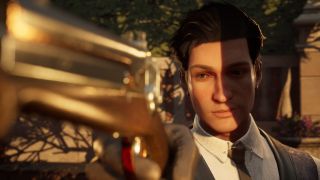 Sherlock Holmes: Chapter One is the next game from Frogwares, a development studio based in Ukraine that’s been making Sherlock games for almost 20 years now. Building on ideas the developer first experimented with in Lovecraftian detective adventure The Sinking City, it’s an open world game, set on the fictional Mediterranean island of Cordona. And it stars a younger, hotter Holmes, giving us a glimpse of the world’s most famous detective in his youth.

In its previous Sherlock game, The Devil’s Daughter, Frogwares gave our hero a fairly major makeover. Instead of the familiar tweedy, stuffy Basil Rathbone look, we got a more rugged Sherlock, like a hungover Jon Hamm. But this version of the character is even more of a departure, looking like someone you’d find in Final Fantasy. I’m not entirely convinced by the design, but after eight Sherlock games, I don’t blame Frogwares for wanting to mix things up.

This week I spent some time with an early build of the game, and got a taste of some of its new investigation mechanics. I was glad to discover that the Mind Palace system, where you manually link clues to make deductions, is back. But there are also a few new techniques to help you outsmart Cordona’s many criminals. The early case in my demo took place in a lavish hotel, where the theft of a priceless diamond during a séance leads to a murder in one of the suites.

Evidence pinning is a neat idea. Once you find a clue, pinning it means you’ll ask any NPC you interact with about it. In my demo this means the various guests sprinkled around the hotel, but in the open world you’ll be able to quiz people on the streets. If they don’t know anything they’ll wave you away, but if they do you’ll get a snippet of information that could advance your understanding of the case. The only slight letdown here is that these interactions all happen via text and stock dialogue, meaning it never truly feels like a conversation.

You have to think about who you ask, which is where the game’s concentration mode comes in. This is used for a lot of things—tracking footprints, finding clues, reconstructing crime scenes, and so on. A visualisation of Sherlock’s detecting skills. But it especially comes in handy when you’re looking for a particular kind of person to question about pinned evidence. Look at an NPC and words will hover around their head, describing their appearance, demeanour, or occupation—which you can then use to pinpoint a specific person of interest.

Disguises are also important. These include hats, wigs, masks, glasses, and even bruises and scars. I didn’t get a taste of this myself, but Frogwares notes that some NPCs will be more willing to help you if you’re dressed a certain way. Disguises have always factored into the developer’s Sherlock games, but it seems like they play a much bigger role here. I notice a fairly detailed disguise screen, with a lot of different options, as I surf the menus in my demo.

Eavesdropping is new, too. Linger near two people talking and phrases are plucked out of the conversation, floating across the screen. The trick is to dismiss the irrelevant ones and take note of anything pertinent to the case. All of this, on top of returning systems like the Mind Palace and closely analysing people to figure them out, makes for a much more interactive and involved detective game. The murder case I solved was pretty fun too, with a lot of surprising twists and turns, and two very different ways to deal with the culprit at the end.

I like what I’ve played so far, but my demo was limited to a relatively small space. It’ll be interesting to see how Frogwares approaches the open world aspect, and whether it’ll actually add anything meaningful to the experience. I’m just glad to see another detective game on PC. It’s my favourite genre, and Frogwares has made some of the best examples of it—and, admittedly, some I’m not so keen on. With the likes of Disco Elysium, Overboard, and Paradise Killer taking detective games to new heights, Sherlock Holmes: Chapter One has to work harder than usual to stand out. I hope it manages it.