Hot News The best builds for Yanfei in Genshin Impact 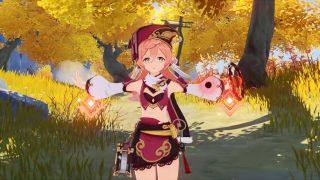 Looking for the best Genshin Impact Yanfei build? Liyue’s legal ace is a potent Pyro spellcaster, and even though she’s often referred to as ‘discount Klee’, she’s plenty powerful by herself. Yanfei is a versatile damage-dealer: Her ability to produce Scarlet Seals means she can be built towards charged attack damage, but because she’s a Pyro catalyst user, she can also spam those elemental reactions.

That’s not even mentioning the crit bonuses her passive skills provide. Genshin Impact version 2.0  introduced strong characters like Ayaka, with Yoimiya and Sayu just over the horizon, but Yanfei remains more than just a stand-in for Klee, and is a powerful Pyro damage-dealer in her own right.

Here’s the best Genshin Impact Yanfei build, as well as info on her abilities, constellations, and how to unlock her.

Yanfei is a Pyro DPS character who draws the most of her strength from Scarlet Seals, a resource summoned through normal attacks that increases the damage of her charged attacks. Any of Yanfei’s best builds maximize this damage output.

Considering Yanfei’s attacks grant Scarlet Seals that also strengthen the power of her charged attack, this is the perfect synergy: build buffs through your normal attacks, unleash a powerful charged attack—rinse and repeat.

This artifact set grants Yanfei an elemental mastery increase of 80 for two-pieces, strengthing the power of the elemental reactions she causes. Four-pieces also grants a massive 35% bonus in charged attack damage for any character using a bow or catalyst. As with Dodoco Tales, this set synergises extremely well with Yanfei, strengthening the potency of elemental reactions caused by her all Pyro attacks, while also adding another buff to her already-powerful charged attack.

This five-star catalyst is great for Yanfei, since it boosts elemental damage by 8% every four seconds, and stacks up to four times, allowing you to make the most out of her Pyro-based attacks. It also boosts movement speed by 10%, which is a nice little bonus when trying to evade.

This artifact set is the go-to for Pyro damage-dealers, as it offers a Pyro damage bonus of 15% when two pieces are equipped, and increases Overload and Burning damage by 40% when wearing four pieces. This set also boosts Vaporize and Melt reaction damage by a further 15%, and adds an additional 7% Pyro damage for ten seconds when you use an elemental skill.

Catalyst users are usually perfect for triggering reactions due to their elemental attacks, so this set is perfect for Yanfei, strengthening her Pyro damage, and every Pyro-based elemental reaction she’s likely to cause.

If you’re looking to snag the fiery lawyer, you’re in luck! As of version 2.0, Yanfei is available with boosted rates through Ayaka Heron Court banner. If you’re hoping to get her, now’s your best chance, especially as the current banner ends on August 11. If not, you’ll have to wish on the regular character banner and keep your fingers crossed, or hope she appears again before long.