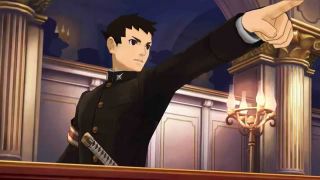 Running until September 30, the survey wants to know about your experiences with The Great Ace Attorney Chronicles—including, optimistically, if you haven’t bought it “yet”. Though, in fairness, you can then click through to say you “definitely won’t purchase it”, and instead answer questions your general gaming preferences. No need to pull out your objections.

For players who have played the game, there’s a fairly detailed set of questions on what expectations they had going into the game, and their opinions on the game’s performance. It gets into the nitty gritty, asking about things like the characters’ personalities, and animations, but also the key configuration and the resolution. And of course: would you buy a future Ace Attorney game?

It’s an intense level of gathering user feedback, for which the reward for your time is an “original digital wallpaper”. If you’re the kind of person who can summon opinions about how good the iconic sound effects were on a 7-point Likert scale, why not check it out for yourself? Maybe one for Rachel Watts to take on, after her review of the visual novel and its take on the well-beloved, iconic detective… Herlock Sholmes.