Hot News How The Ascent evolves the ARPG genre 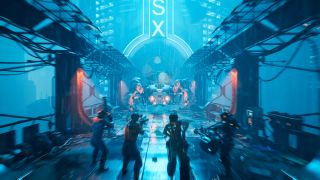 Neon Giant’s long-anticipated twin-stick shooter ARPG has finally arrived, granting players the opportunity to blast their way up through the glimmering cyberpunk city of Veles. The Ascent puts action above all else, but does so with an impressive amount of flair and polish that we rarely see in the genre. Watching the light from explosions reflect off the aggressively neon-soaked surfaces of the city will be a particular treat for those aboard the ray-tracing train.

The Ascent feels like the first truly next-gen game of its kind, fittingly set in a spectacular setting of bright lights and dark deeds. Here are a bunch of ways in which it’s different to earlier games of its kind.

Many of the great ARPGs with a traditional isometric perspective tend to have ‘zoned’ worlds, where you can usually expect a loading screen before moving onto the next area. The world of The Ascent is seamless, with new areas usually blocked off only by security gates.

Whether you’re slumming in Deepsink or desecrating the affluent neighbourhoods of the lofty elite, you can seamlessly travel between these areas on foot (or just take the subway or taxi if you’re in a rush). There are many secrets and side-quests amidst the backstreets of Veles just waiting to be uncovered.

Another bad habit of ARPGs is that they tend not to look amazing, often keeping the camera high up away from the action. And make no mistake, The Ascent definitely earns the ‘Action’ part of that acronym, but it also knows how to use cinematics to pull you into its world that bit more.

There’s a proper dialogue system, with the camera zooming in over your shoulder when you chat with the world’s people (and aliens). The camera may pull in close as you explore a new area or even flip to a 2D platformer style for certain segments. Cutscenes, meanwhile, give you a good feel for the various deplorables you meet throughout the game. It’s a welcome layer of polish that makes The Ascent feel truly special.

Part of the fun in cyberpunk games is the amount of customisation they offer—it’s all about the outrageous haircuts, tattoos that could equally well be microchips, augmentations and outfits that look like they’re from a distinctly ’80s vision of the future.

The Ascent offers all the customisation RPG and cyberpunk fans could desire. There’s a huge wardrobe of gear for you to try on, a customisable Cyberdeck that lets you hack terminals and devices around Veles, as well as a skills and attributes system that lets you create unique character builds—whether you’re a tanky heavy gunner or sneaky sharpshooter. If you want to change up your build mid-game, just put in a few uCreds and you can completely reallocate your skills!

Developer Neon Giant may only consist of 12 people, but among its number are alumni from FPS classics like Far Cry 3, Wolfenstein and DOOM. So it shouldn’t come as too much of a surprise that The Ascent really gets its gunplay right.

Beyond the classic ARPG dodge moves and twin-stick running-and-gunning, The Ascent has a proper cover system. This lets you crouch behind objects and fire above them while keeping your head low, or even run around with your gun above your head to shoot enemies on higher ground. But be careful, because the environments are destructible, so you can’t ever hunker behind cover for too long.

With the environment always changing in The Ascent, you’ll need to be prepared to keep moving.

Ready to begin your rise through Veles? Lock and load, Indent (game reference—you’ll get it one day). You can grab The Ascent on Steam now.