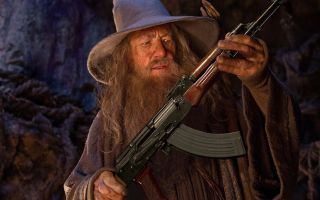 “This is pretty much the image that started it,” says Patrick Morgan, whose title is “Business Doer” for Galvanic Games. The picture is of Gandalf holding an AK-47, a meme that inspired Galvanic to name their upcoming co-op survival sandbox “Wizard with a Gun.”

A meme of Gandalf packing heat isn’t the very start of it, though. Galvanic (back in 2016 it there were just four of them) had been playing a lot of Klei’s Don’t Starve Together, and were kicking around the idea of a game about “gritty, western-style wizard gunslingers whose bullets came out in the form of spells,” says Morgan. Another meme they enjoyed showed Harry Potter shooting Voldemort with a handgun.

“Both of those images made it into an embarrassing number of the pitches we put in front of publishers,” Morgan says.

Then one member of the team came up with the name Wizard with a Gun. “It so simply captured the world and game we wanted to create, plus it was stupid and fun. We bought the website then and there,” Morgan says.

The team built a prototype of Wizard with a Gun in a week. Then it was shelved for several years because Galvanic couldn’t find a publisher for it. Finally, they showed it to Devolver Digital at GDC in 2019, and “they turned out to be the perfect fit,” Morgan says.

In Wizard with a Gun, players will battle creatures in randomized overworld biomes, gather resources, and concoct spells in bullet form back at their base. The trailer shown at E3 was half cinematic and half gameplay, and before you ask, here’s the excellent song backing the trailer: It’s Breath and Bone by Ryan Ike, who also composed music for Where the Water Tastes Like Wine and West of Loathing.

Morgan explained some of the lore and backstory of the unusual world and Western-style showdowns we see in the trailer. In the realm of Wizard with a Gun, a magical cataclysm has destroyed parts of the world, and even hundreds of years later people still don’t trust magic or wizards much. So, wizards started packing heat and “gunmancy” was born.

“Gunmancy,” says Morgan, “was invented recently as a ‘safer’ way of controlling and channeling magic, but gunmancers are still loathed throughout the broken portions of the world. Making things worse, gunmancers have been adventuring and raiding the ruins of fallen civilizations in hopes of finding more potent reagents for their bullets.”

When you have outlaws, you have bounty hunters. The fellow with the very long gun in the cinematic portion of the trailer is a Mage Hunter, one of the enemies players will face. And that desert shown wasn’t always a desert. “The now desolate Barren Sea was an ocean before the world broke, but its inhabitants have long since moved beyond sea-faring and have become desperados and bounty hunters.” Also shown is a place called the Fell, “a swamp that has overgrown the ruins of a civilization that was destroyed by magic long before the latest cataclysm.”

When players aren’t romping around the dangerous world doing battle and collecting resources, they’ll have a tower they can build, upgrade, and craft in. “The Tower is in a separate pocket dimension from the main world,” says Morgan. “Time doesn’t matter there. This is great for the player when it comes to planning, preparation, and taking a breather from the chaos of the overworld.” The tower is persistent, regardless of what happens outside, so player inventory and progress are safe inside it.

“This is important when it comes to building spells,” Morgan continues. “There are some spells that can deal a lot of damage and destroy a lot of ground. It’s up to the player to strike that balance—do they go through the world destroying everything in order to gather resources quickly, or do they try to keep the world alive longer to sustain a garden of renewable resources?”

Wizard with a Gun is described as a “online cooperative sandbox survival game,” though interestingly the survival portion is more aimed at the world than the player (there’s no hunger meter, for example). Morgan says this is because “we wanted to focus more on the shared experience of trying to keep the world alive or harvesting enough resources from it to progress before it dies.”

You can play Wizard with a Gun solo or in co-op to work with friends. “Players share one Tower on a server, but it’s easy to build out your own personal section. Upgrades, spells, and research are shared across all the players in the Tower. This means that if you create a really cool spell, piece of clothing, or gun, you can share it with another player.”

Since this is a game about wizards, and wizards wear hats, I asked Morgan about wizard hats. Morgan not only sent me a bunch of pictures of cool wizard hats, but explained that they’re not just cosmetic but functional—though function isn’t permanently tied to clothing items.