Hot News Marvel's Guardians of the Galaxy: Everything we know about Eidos Montreal&rsquo;s sci-fi adventure 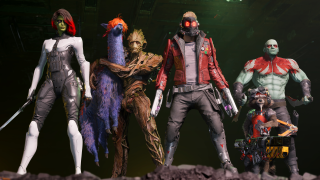 We’ve scoured all corners of the cosmos to bring you all the info about Guardians of the Galaxy below. Here’s everything we know about Eidos’ upcoming adventure.

You can watch the Guardians of the Galaxy E3 trailer above. It’s a gameplay trailer showing a mixture of in-game cutscenes, dialogue and combat sequences. At the start of the trailer, the Guardians mention that they have a fine to pay off, which could be the spark that kicks off the story. Later, they explore an exotic planet, fighting enemies that resemble dogs with squid-tentacles for mouths. The trailer also shows them getting into various other scrapes, including a situation that may necessitate the removal of Drax’s trousers. Oh my!

In addition to the trailer, Square Enix also showed an 11-minute extended gameplay demo, which shows the Guardians visiting a hostile planet to “sell” one of their team to a warlord named Lady Hellbender, who resides in a fortress on the planet. The demo also gives us a closer look at some of the game systems, including decision-making and combat abilities.

In addition, there won’t be any microtransactions or DLC. “There isn’t going to be any DLC for this game,” said Eidos Montreal’s Mary DeMarle in Fraser’s preview of the game. “There isn’t going to be any microtransactions, and that’s because, for us, it’s very important that on day one, when players get this game, they can have access to everything.”

Guardians of the Galaxy’s story will see the five guardians basically attempting to solve a problem they helped cause. Entertainment Weekly quotes a “previously recorded Q&A” in which Mary DeMarle states that the story “Takes place several years after a massive galactic war where the universe is still dealing with the repercussions of that.” The Guardians form after this war, commencing their adventures across the galaxy.

DeMarle continued to say that “During one of their escapades, because of a silly bet between two of them, they may or may not cause a very small accident to happen that eventually takes on a life of its own and gets bigger and bigger and sets off a chain of cataclysmic events that will threaten the universe if the Guardians don’t take responsibility and stand up to it.”

Another surprising creative choice by Eidos Montreal is that you’ll play the game entirely from the perspective of Peter Quill. Given Guardians’ ensemble of characters, it would appear more logical to let players control all of them in some way, perhaps switching between them. But Eidos specifically didn’t want player to be control of everything, in order to replicate the chaotic energy that drives the Guardians forward.

The decision is also central to Star Lord’s character arc, which involves trying to bring the Guardians together as a team and reconcile all their conflicting personalities. “As Peter Quill, you get to guide them into this more concrete family that really needs to become who they have to be in order to save the galaxy,” said DeMarle in Fraser’s preview.

Like the Avengers game, Guardians of the Galaxy’s characters don’t feature their movie likenesses. So while you’ll be playing as Star Lord, you won’t be playing as Chris Pratt’s Star Lord. That said, the characters don’t share the deeply uncanny appearance of the Avengers crew. I suppose it helps that most of the Guardians are aliens. Both Rocket and Groot look very similar to their movie counterparts, while Gamora and Drax are similar, but also stylised enough in their own way that you don’t get that uncanny feeling from them.

It’s also worth noting that, likenesses aside, the game nails the character representations. The personalities are spot on, Rocket’s recklessness, Drax’s direct and literal nature, Groot’s, um, Groot-ness. They all play off each other in the right ways, lending all the footage shown so far a fantastic pace and sense of knockabout humour.

As the leader of the Guardians, you’ll need to make decisions about how to approach certain problems and situations. These decisions will affect how the story plays out in various ways. In the gameplay demo, for example, we see the Guardians hatching a scheme to sell a “monster” to Lady Hellbender. Either Groot or Rocket will pretend to be the monster, and as Star Lord, you must choose who gets the role.

These decisions can affect your relationships with the other Guardians, in what DeMarle refers to as the “Memory” system. Another example sees Star Lord decide whether or not to have Groot throw Rocket across a ravine in order to lower a bridge. If you choose to throw Rocket, it understandably  annoys him, and he’s less likely to help you out in other situations farther down the line.

Alongside dialogue and choices, combat will play a major role in Guardians of the Galaxy. At a basic level, it’s a straightforward third-person shooter that’ll see you blasting your way through an assortment of alien beasties and other foes. What makes it interesting is how each Guardian has their own fighting style. This can help you in a scrap, but it can also cause problems. Drax, for example, is designed to fight aggressively and can stagger enemies easily. But, as Fortier pointed out while speaking to GamesRadar, he also “takes on too many enemies, which leads him into trouble that you’ll have to extricate him from.”

Leave a reply "Hot News Marvel's Guardians of the Galaxy: Everything we know about Eidos Montreal&rsquo;s sci-fi adventure" Cancel reply