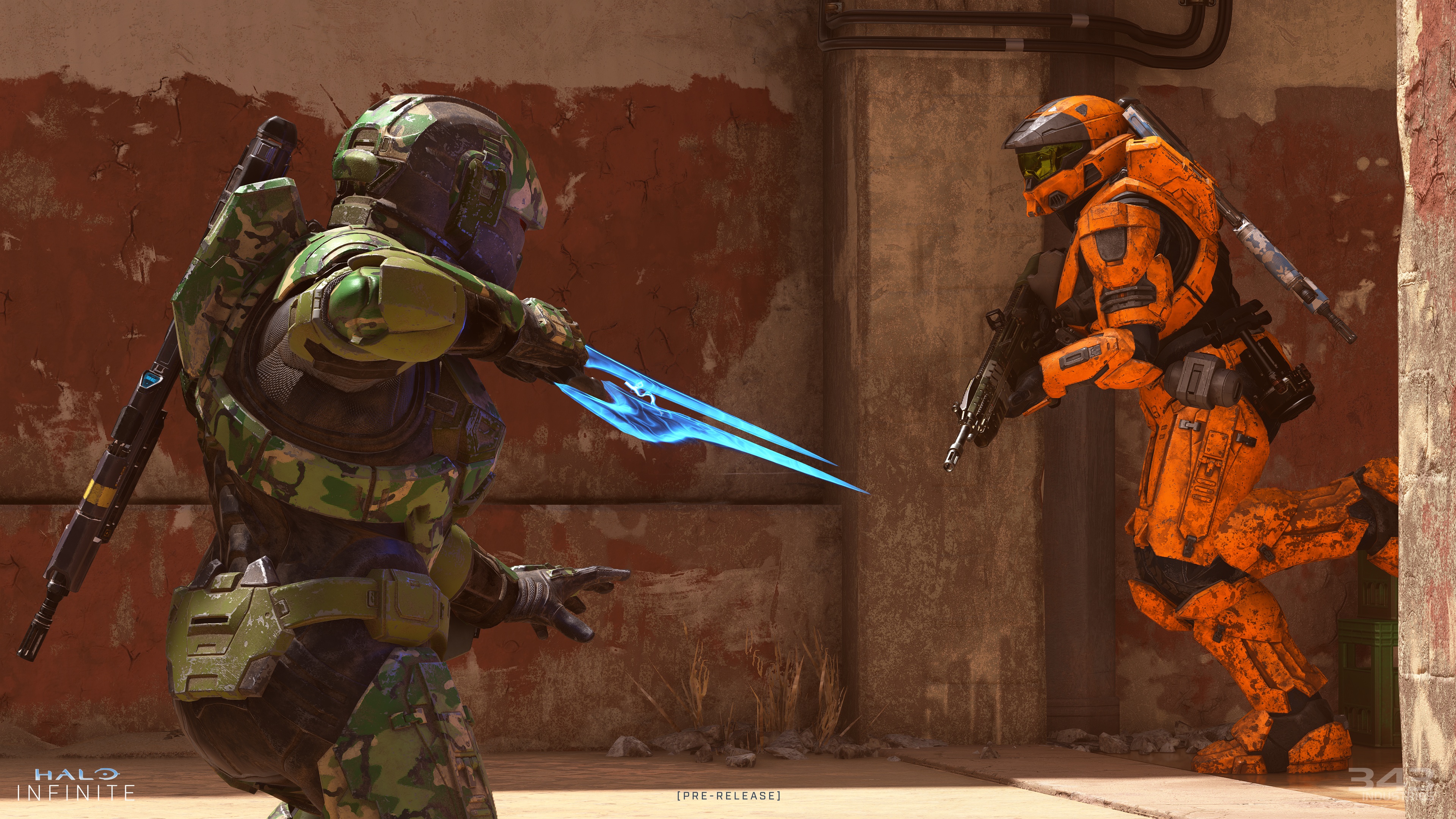 This weekend, 343 gave us our first look at Halo Infinite’s multiplayer at the Xbox & Bethesda showcase. With that short tease leaving us cautiously optimistic for Halo’s future, the developer then opened the floodgates with a deeper dive into Infinite’s explosive sandbox.

We’ve already looked at how Halo Infinite’s free-to-play system works, with battle passes that never expire and a firm stance against loot boxes and random drops. But 343 showed off a lotta changes yesterday, with a fair few only appearing for a fraction of a second. So let us catch you up on what you may have missed in this orbital drop of small details.

Pop quiz: what team is that Spartan on? Okay, so the flag gives it away somewhat, but this red/blue coating suggests that team colours have been given the boot. Instead, you’ll be able to use whatever colour scheme you want regardless of team, with enemy players marked out in bold red outlines so you always know who to shoot.

It’s a small thing, but I’ll miss red players being red and blue being blue. Shooters have been skewing in this way for some time, but for me, an outline will never be as immediately readable as a squad of super-soldiers painted in bright red charging your position. That said, if you’ve put a lot of time into your look, it’ll be nice not to have it erased every time you queue for team games.

Halo Infinite is pointedly nostalgic, and nothing screams that more than the armour. We’re back to Halo 3 and Reach-era designs—thick ‘n’ chunky armour that correctly has you looking and feeling like a walking human tank. It’s a long-welcome change from Halo 4 and 5’s designs. Those games skewed heavily into showing a lot of the underlying wetsuit, armour pieces treated like overdesigned life-vests, cluttered with details and looking just a little bit mecha.

Could I turn my Halo 4 soldier into a good-enough facsimile of Evangelion Unit 01? Yeah. Was that Halo? Not really, no.

The best bit of Halo multiplayer, obviously, is playing dress-up with your sci-fi soldier. In that regard, Infinite doesn’t disappoint—there seem to be countless options for customisation, with more added in each new season. Helmets, kneepads, forearms, visor colours—hell, you can even tweak and personalise your own AI, who’ll commentate matches alongside the standard Halo bloke.

These will chime in with their own insight and commentary, coloured by their own personality, and are pointedly meant to sound more like a Cortana-like voice riding shotgun in your skull.

One welcome option is the ability to represent prosthetic limbs. Beyond just giving you a robot arm and leg, you can pick how extensive each prosthetic is—whether it goes up to the wrist, elbow or shoulder.

And yet, despite all these options, personalised colouring is gone. Instead we have “Coatings”, a set of predefined skins that apply to any armour combination, ranging from simple block patterns to more bespoke camouflage and patterned looks.

That does, ideally, mean that you can push your look into patterns well beyond what the classic primary / secondary / tertiary colour split allowed. But it also somewhat reduces the possibility space. There was a simple pleasure in having three whole palettes to mix and match. Now, you’re limited to what Coatings you have unlocked, with bolder colours and patterns likely restricted to higher-rarity coatings.

One controversial move 343 made in taking over Halo was to add the ability to aim down sights on many weapons that never previously could—notably, the starter assault rifle. Dubbed Smart-link, Halo 5’s implementation went beyond just zooming in the camera. If you activated it while jumping, you’d hover in mid-air, letting you deal death from above with improved stability.

Infinite’s implementation doesn’t look quite so dramatic, with only a few instances of Smart-Link showing a slight 1.4x zoom and no fancy gimmicks. Adding the option to bring a bit more accuracy to spray-and-pray weapons like the AR will likely remain contentious, but fans have noted that much of the video still stressed the importance of good ol’ Halo hip-firing.

Halo’s never had bots before (except as cannon fodder in Halo 5’s Warzone mode). Fortunately, it seems 343 has gone all-in on the series’ first dip into AI opponents. Introduced as part of the game’s training grounds, it looks like you’ll be able to customise everything from their numbers and team to weapon loadout, equipment, and difficulty. But there also appear to be more helpful training options such as letting you reveal enemy bot locations, while one short clip seemingly shows the ability to highlight which part of a bot’s body you hit.

Our overview focussed a lot on the return of Big Team Battle (now 12v12 instead of 8v8) and smaller-scale arena fights. But we also got confirmation that in-game map editor Forge will return, along with the Theatre replay mode.