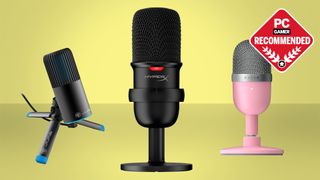 Cheap microphones have been one of the biggest streaming hardware trends of the last 12 months. But we’re not talking about cheap and cheerful, throwaway tech here—the biggest PC peripheral brands have got in on the action, with cheap microphones that eschew fancy extras and instead focus on great sound and ease of use. The best cheap microphones give the budding content creator everything they need to get started for as little as $40. No, really.

It’s no question that any serious streamer needs a microphone. Though, if you’re just starting out, the prices for the best microphones for streaming can come as a bit of a shocker at up to $300.

Some of these cheap microphones may be lacking features like volume and gain controls (and in some cases even a mute button), but they make up for it by sounding just as good as their pricier counterparts. This does mean you’ll have to rely on third-party broadcast software like OBS and XSplit if you want to fine-tune your sound. Although the best cheap microphones are still designed to deliver the same great sound recording as the more expensive mics, and be as easy as possible to use out of the box.

We still follow the same criteria for the cheaper mics on this list; all we added was a budget of $100. We still want the best sound quality, adaptability, and form factor. There are tons of budget mics in the $40-$100 range out there from brands you’ve never heard of, so it’s easy to feel a little paralyzed by choice. Thankfully, we’ve picked out a handful that stands heads and shoulders above the rest.

The HyperX SoloCast is a budget microphone that sounds just as good as, if not better than, microphones double the price. It’s less flashy than HyperX’s other mic offerings, and I won’t lie, I miss the RGB lighting. The sound quality on this mic for $60 is just incredible. It more than makes up for losing out on some of the quality of life features.

While the JLab Audio Talk GO and Razer Seiren Mini all offering great sound, the HyperX SoloCast still reigns as the king of budget microphones, essentially giving us the audio chops of its pricier QuadCast S compatriot but for a fraction of the price.

The Razer Seiren Mini is one of those obnoxiously adorable pieces of hardware I instantly want to put on my desk. Its stylish pill-shaped design and color variety give the Mini the personality lacking in some of our other choices on this list. And it sounds incredible, to boot.

Remember earlier we mentioned that some of these microphones had to sacrifice some features? Yeah, well, the Seiren Mini pretty much gives up everything. Some people won’t care because you’re getting a killer mic for $50. At the same time, some other people won’t get over the fact that there’s no mute button.

This miniature version of the classic Blue Yeti is the perfect microphone for those just starting with streaming. It has an excellent sound quality for a product under $100. Simultaneously, its tiny size and lightweight metal build make it easy to transport (this is at least 40 percent smaller than its larger cousin). The Yeti Nano sits as an outlier as the most ‘expensive’ budget mic on the list but offers more than the cheaper mics regarding features.

The difference its 24-bit, 48 kHz recording sample rate makes is noticeable, too; putting audio from the Nano and original Yeti side by side reveals that the former is superior by quite a margin. It’s only got two polar patterns (cardioid and omnidirectional), but the Yeti Nano more than makes up for it with everything else.

The JLab Audio Talk GO does a great job providing a decent-sounding microphone for podcasters and streamers on a budget. The Talk GO’s small stature and companion stand are perfect for anyone looking for a microphone that travels well and doesn’t take up much space on your desk.

Even though the GO only has a pair of Condensers, the sound of my voice still came out better than expected, although a bit tinnier than I would like. You may not be recording the next hit single on this microphone, but it is great if you’re dipping your toes into the whole streaming or podcasting scene.

I’ve tested a few different mics from JLab Audio. Given its history in the affordable audio space, it’s no surprise the Talk GO was the USB microphone that impressed me more than its more expensive offerings, the Talk and Talk Pro. The Talk GO is a great affordable microphone without sounding or feeling cheap.

These are the most common polar patterns:

Cardioid: Records in front of the microphone. Perfect for voice-over, vocals, and streaming.