Hot News Reviewing the critters of Subnautica: Below Zero 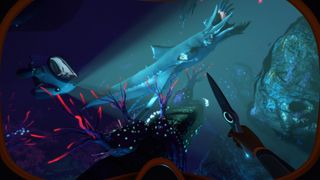 Subnautica: Below Zero is a great survival game for many reasons, but what makes it one of the most unique survival sims is its colourful and creative fauna. Below Zero’s animals range from small fish that can fit in your hand, to huge, terrifying leviathans that can fit you in their mouths. The way you interact with these animals, and the ways they interact with you, are a crucial element in Below Zero’s dynamic and surprising journey of discovery.

But which is the best creature in Below Zero? The apex predator, the cutest critter, the emperor penguin? To find out, I gathered up Below Zero’s marine menagerie, and ranked them according to the following criteria: cuteness, threat, function, and strangeness. So let’s find out who sinks and who swims.

The pengwing is basically a penguin, only it has four eyes and its beak is on the top of its head. You’ll see them waddling around on ice floes and diving for fish in the shallower areas of Below Zero’s arctic ocean. They’re passive and friendly creatures, unless you pick up their young, whereupon they’ll quickly put a beak-shaped hole in your diving suit.

A baby pengling. Similar to the adult, but much cuter.

The pinnacarid is a pengwing that God dropped and then accidentally stood on. This evolutionary disaster of a bird has an inexplicable number of fins, antennae, and weird bladelike growths protruding from the sides of its head. It’s entirely harmless and can actually be fed fish by the player, but it is phenomenally ugly.