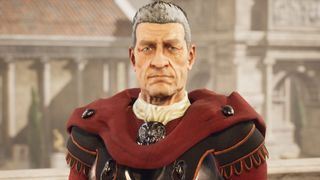 A couple of hundred years ago, the English philosopher Jeremy Bentham dreamt up an enormously unpleasant method of using architecture to stamp out anti-social behaviour. Bentham called for prison cells to be built around shielded watchtowers, or “panopticons”, from which guards could monitor prisoners unobserved. He argued that the pressure of living under steady scrutiny, rather than punishments in themselves, would slowly mould each prisoner into a model citizen. Best of all, Bentham suggested, there doesn’t have to actually be a guard in the panopticon for the panopticon to ‘work’. After all, the suspicion of being spied on is often more daunting than the certainty.

There’s a panopticon of sorts in The Forgotten City, Dear Villagers’ swish Roman reimagining of the award-winning Skyrim mod from 2017—a clifftop temple at the far end of the map, its huge doors tightly sealed, its patron god an enigma, its portico offering hazy views of terracotta villas, market squares and streets lined with anguished golden statues. The temple is the apparent source of “the Golden Rule”, a city-wide holy mandate whereby if one person sins, everybody will perish by ghastly magical means.

The trouble is, nobody in The Forgotten City—which is functionally a prison in that nobody’s discovered the exit—can agree on the definition of a sin. The baseline seems to be murder, but what about telling a lie that gets somebody killed? Is charging a ridiculous price for a vital remedy a sin, and by extension, is theft OK if it’s to save somebody’s life? How about worshipping the ‘wrong’ god, or having the ‘wrong’ sexual orientation? Everybody you meet in the game—from closet Christians to household slaves—is preoccupied with these questions, and awash with anxiety about the actions of other characters with different beliefs or value systems. And looming above it all, that temple, a suffocating sentinel that, far from nurturing a spirit of goodwill, has everybody teetering on the brink of civil war.

The Forgotten City feels, at times, like a playable rebuttal of Bentham and of systematic snooping in general, shaded by more recent study of the psychological and social impact of perpetual surveillance. But it’s primarily a whodunnit, or rather a whogonnadoit. You play a bewildered tourist from the present day, sent into the city’s ruins by a strange woman after waking by the river Tiber. Having tumbled through a wormhole to Roman times, you’re brought before the local magistrate and asked to track down somebody he suspects is planning to breach the peace. Fortunately, you’re insulated against disaster by a time-loop ritual that’s cast whenever everything goes to hell, returning you to the start of the day. This grants you leeway to test the Golden Rule’s limits and divine its purpose, while chasing down and cross-examining the City’s 20-odd residents.

As with The Sexy Brutale and other cycling detect ’em ups, the core thrill here is rewinding the clock until all the pieces fall into place. Every failure to solve the mystery fills out your journal with fresh lines of enquiry and additional waypoints. There’s a handful of tools, including a flashlight and a (forgivably implausible) Ancient Roman zipline handle for speedier back-tracking. Depending on your choices, you can also expect a brief burst of wonky action-platforming later on. But progress hinges mostly on unlocking new conversation options by gossiping to people about their neighbours, or simply watching the chain of events unfold.

The game is no looker, and the build I played was uneven on my 8GB i7 laptop, with frequent chugging on Epic settings and minute-plus loading breaks. You can definitely still see the fan project lurking beneath the gilt. But the city is enjoyable to stumble through nonetheless, with its flickering red interiors, stacks of amphorae and curious second population of golden effigies, some of which whisper to you as you pass.

Exploring the world soon gives way to more purposeful jabs at the underlying clockwork, with multiple endings dangling in the balance. There’s an election in progress, and one of the challengers has declared that the Golden Rule is just a scam to keep the populace in check. You might want to drum up a little support for the incumbent ruler, whose daughter has, incidentally, gone missing. But hang on, what’s all this about an armed man in the bathhouse? And what of the physician who has barricaded herself in the palace?

The subplots and dialogue writing aren’t that spellbinding next to, say, Paradise Killer, but it’s a nice little collection of personalities, spiced up by nerdy period humour such as the local priestess telling you off for just walking up and talking to her, rather than observing the proper ceremonies. (Less successfully, there’s a running gag about Karen memes.)

Beyond the story it weaves, The Forgotten City is quietly fascinating in that it gets you thinking about how videogames represent surveillance versus how they operate as surveillance mechanisms themselves. Videogames, you could argue, are inherently nosy. As simulations organised around the player, they track and monitor you from all angles, whether they’re harvesting data for publishers, scaling up the difficulty in response to a run of victories, or just trying to put together a seriously granular results screen.

The Forgotten City doesn’t actually make all that visible to the player, of course—it’s no fourth-wall breaker, or at least, not so far. But it does centre it for analysis. Witnessing the deranging effects of continual surveillance on its cast, meanwhile, leaves me wondering not just what kinds of information videogames have on us, but how the mere awareness that they’re watching might shape our behaviour. Perhaps whatever resides in that temple on the cliff will help me fill in the picture, assuming there’s anybody in there at all.