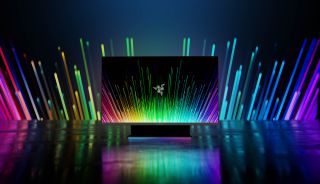 The new monitor is very much a like-for-like swap for the previous model, although there is one notable improvement. The new Raptor is capable 165Hz, a step-up from the 144Hz previously. It’s not clear whether that’s the result of a whole new panel or a moderate overclock out of the box, but I would guess the latter as the remaining specs are near-enough identical.

That said, Razer’s now touting the Raptor as the world’s first with THX certification. What that means is Razer put this panel through a heap of tests, 400 of them, to ensure it hits certain image quality standards.

Seeing as not much has changed specs-wise between the old Raptor and the new Raptor—DCI-P3 remains at a steady 95% on seemingly evenly-matched IPS panels—I’m not sure if much has materially changed to secure THX certification. Still, you can at least be confident that this monitor is up to a good standard.

A little while ago I used the older Raptor model, and I have to say it’s the stand that will win most over. It’s sleek, it must be said, and comes with rear channels for cables and a foldable arm design. Oh, and RGB, of course. It does take up precious desk space over a regular gaming monitor stand, but hey, what some will do for a 1337 gamer setup.

The stand is sticking around for the new Raptor 27, so you’ll want to check the refresh rate before hitting the checkout to ensure you’re getting the latest version. Conversely, if the older model goes for a bit cheaper, 144Hz is pretty darn great, too.