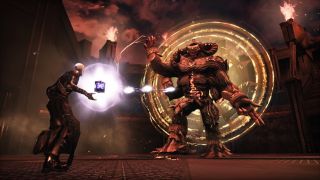 When the GOG Summer Sale kicked off last week, my first thought was, “What gives? Where’s my free stuff?” There are plenty of good deals in the sale, yes, but frankly I have grown spoiled over the years and these days I don’t get out of bed unless someone’s waving a free game in my face.

Today, my question has been answered: The sci-fi Soulslike Hellpoint, the tale of a 3D-printed hero aboard a derelict space station overrun by interdimensional entities acting as puppets of malevolent Cosmic Gods (seriously, that’s what the game description says) is now free for keeps. Just head to the GOG front page, scroll down a bit, and click the “claim the game” button—you’ll also have to agree to sign up to GOG’s mailing list, but I think that’s a fair ask for free stuff.

By all appearances, Hellpoint is an unremarkable, perfectly okay kind of game: It’s got a 3.8/5 aggregate user score on GOG, “mostly positive” user reviews on Steam, and a Metacritic rating of 64/100. That’s not bad! It’s not going to win any awards, but it doesn’t sound like something you’re going to regret installing on your PC, either.

Hellpoint will be on the giveaway table until 6 am PT/9 am ET/2 pm BST on June 16. GOG’s Summer Sale runs until June 28—possibly enough time for more free stuff before it’s over.