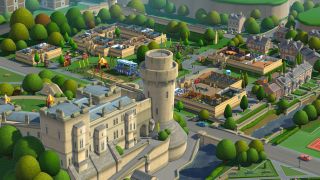 I don’t know what’s scarier: the sterile, antiseptic-soaked environments of hospitals or the soul-destroying educational system. Thankfully, Two Point Studios has taken these usually frightful places and has transformed them into comedic playgrounds, first with Two Point Hospital, and now the Studio’s recently announced follow-up, Two Point Campus. Looks like we’ll all be taking a well-deserved break from clown clinics, ghost outbreaks, and far too many Freddie Mercury impersonators.

“With Two Point games, we always take a setting that sounds kind of mundane and then we twist it and put these unusual layers of humor and charm in there,” Laycock says. “There’s lots of pop culture out there that’s set in universities, Whether it be schools like in Harry Potter, Grease, Sex Education, or Pitch Perfect, there are loads of examples of things that people can resonate with.”

If you’ve played Two Point Hospital, you’ll know that the studio loves its cultural references and comedy antics. The team cannot get enough out of a good pun, and Two Point Campus will follow in its predecessor’s footsteps in that regard. For example, you can open up a Knight School (get it?) where students will take classes in knight literature and compete in jousting competitions.

Two Point Studios is keeping shtum on the game’s other punny classes, but the trailer shows students cooking giant pizzas, building mega robots, and casting magic spells. There’s also a couple of clowns wandering around campus, so no doubt they’ll be a clown college joke in there. With all these distinct schools, there is a huge range of students that you’ll get to know.

“There are lots of different archetypes of students walking around campus,” Laycock says. “You’ve got your knights alongside more traditional archetypes that we associate with universities like jocks, goths, and nerds. There are all these characters and personalities to contend with.”

Looking after your students is your number one priority (after you’ve taken their money of course) and you can’t just build a classroom, plonk a teacher inside, and be done with it. There’s a lot more to building a university campus than you first might think.

“You need to make sure they’ve got all the educational stuff they need, like libraries, all the course materials, and lecture theatres,” Laycock says. “But also all the fun stuff like clubs, societies, gigs, events, and making sure that you’ve got the right dorms laid out how you want. Then if you do all that right, you need to surround them with friends and they’ll develop friendships and relationships.”

To build the campus of your dreams, Two Point Studios has updated its management and building tools. With Two Point Hospital, the game provided layouts that were already in place, but Two Point Campus is completely different. It lets players plan out and build the entire campus themselves, almost like a city builder. You can also customise your campus with trees, picnic areas, picket fences, and placing down pathways.

This will all cost money of course, and the more students you attract to your campus the more money you make. “Keeping your campus a happy, clean environment is important, but all of that costs money,” Two Point Studio’s Art Director Mark Smart says. “That’s part of the management, do I spend that money and make my campus really nice and have lots of plants everywhere? Or do you sacrifice that a little bit so we’ve got a bit more money in the bank?”

As seen in Two Point Hospital, it’s all good laughing at Two Point’s kookiness, but it’s still a management sim. You’ll be spinning multiple plates (and not just in clown class), making sure students get to class, keeping an eye on the bills, building a bunch of new exciting facilities, and, in classic University nonsense, making sure lecture rooms aren’t double-booked. Laycock explains that the team’s intention is not to stress out the player but to give them options on how to play the game.

“Something that worked really well for us with Two Point Hospital was this curated sandbox approach,” he says. “We gave the player a bunch of objectives, didn’t really tell them which order they needed to do them in, but just enough to let them sort of discover the game and play at their own pace. That’s a big thing for us. Letting people overwhelm themselves and get very stressed if they want to, but if they don’t want that, they just kind of take it at their own pace. They can do that by tackling these objectives in the way they want.”

Thankfully, there will also be summer holidays when all the students are away, giving you plenty of time to revamp the campus ready for when they return in the autumn. After each academic year, students who have passed their classes will graduate (or otherwise retake the year) and be sent into the wider universe of Two Point County. Webley tells me that the studio has “an extensive list” of more ideas for games down the line, ready to fill out the rest of the world.

We have a bit of time before Two Point Campus comes out sometime in 2022 but I can’t wait to build a bonkers campus with oddball students. I think recreating a chaotic version of Hogwarts will be my first endeavour.