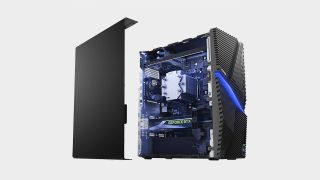 One of my favorite budget gaming desktops is on sale at Dell for under $600. Dell’s running a $579 deal on the Dell G5 Gaming Desktop that anyone looking for a budget gaming rig should jump on ASAP.

This config of the Dell G5 usually lists for $900, but thanks to promo code DBDTG5AFF (at checkout), you can shave over $300 off the price. Since video cards are nearly impossible to come by, this might be the easiest way to get one, especially since some 1650 Super cards sell for nearly $500 on eBay.

Anyone wanting to do some 1080p gaming at a meager cost to their finances should add this machine to their cart. While the 256GB SSD and 8GB RAM is tragically small, you can always upgrade that those down the road, especially since we will have tons of deals on PC components as we get closer to Prime Day later this month.